"This dude picks up and retains information faster than most. His playing incites many to make that feel good stink-face, but don't listen too long or you'll get stuck like that." - Jason Hawk Harris 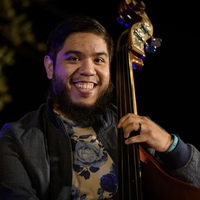 During his time in the DC area between 2008 and 2016, he performed at many area venues, including the Kennedy Center, Lisner Auditorium, Bohemian Caverns, Twins Jazz, IOTA Club and Cafe, the Embassy of Uruguay, and the Embassy of France. In 2013, he spent four months performing with the RKO Quartet, led by Ron Mills (formerly of the Glenn Miller Orchestra), on Royal Caribbean's Oasis of the Seas. He was the regular bassist for the Jennifer Scott Quartet (aka Bergamot Rose), and was a featured musician in the 2014 GALA Theater production Puro Tango II.

Since moving to LA, along with his continued freelancing work, Dominic's primary work is as one half of the duo Roch & Rose. He also plays bass with indie rock band The Lavender Scare, Bloodshot Records artist Jason Hawk Harris, the musician collective Flight of Voices, and Los Angeles lounge legends Marty and Elayne. In LA, he has performed at venues including the Hotel Cafe, Village Studios, the Hi-Hat, Harvard and Stone, and the Dresden. Nationwide, he has performed in cities including Dallas, Tulsa, New Orleans, Memphis, and Brownsville. He also has performed publicly on drums and on cello.

Aside from performance, Dominic is also an avid music educator - from 2013 to 2014, he was a bass instructor with the DC Youth Orchestra Program. Today, he continues to teach private lessons to students of all ages and skill levels for bass, as well as beginner to intermediate levels for piano, guitar, cello, violin, ukulele, and drums.

Dominic is available for live performances, in-studio and remote recording sessions, as well as in-person and virtual private lessons - all styles and genres, both traditional and modern. If you're interested in booking, please shoot a message through the link below!